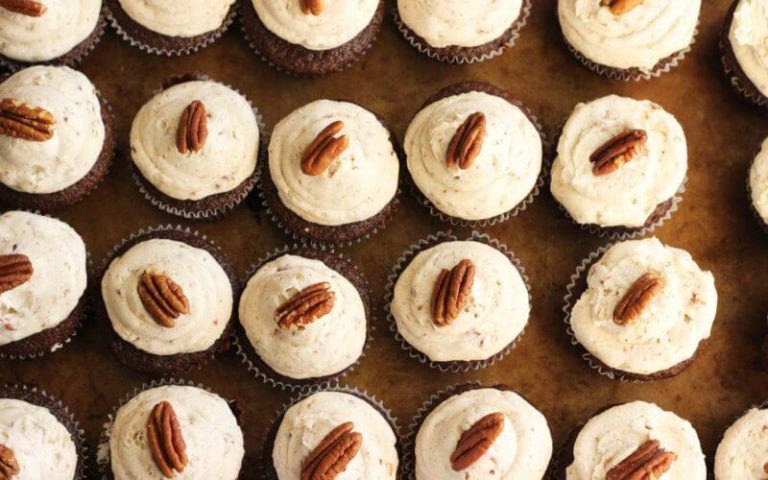 My body is going into hibernation mode, consuming alllll the baked goods, craving hearty sweets like I’m about to crawl into a cave for a few months and need a lining of butter and sugar to keep me warm. Generally, cravings like this are a bit of an afterthought. Something along the lines of, “Huh, I guess I have been craving cookies lately.” But for the past two weeks it’s been more along the lines of, “Okay, I’m awake and have had coffee. I need a cupcake before anything else is going to happen today.”

Weird. But welcome. This desire to throw waistline caution to the wind has been, in my opinion, an exercise in seasonal adaptation. The weather is cooler. The days are shorter. The colors outside are transforming to a slightly duller shade than they were before. My body is just craving a pick-me-up. So instead of exercise, I shall give it cupcakes. And apple hand pies. And fall-flavored cakes. And wine (although that goes without saying).

Consider these little beauties as a blissful transition from the inundation of pumpkin-y things to the sweeter, more decadent flavors of Christmastime (!!!). I adore Mexican chocolate, in part because it’s remarkably easy to get that sweet/spicy flavor. Just add cinnamon and vanilla to your chocolate, and that’ll just about do it for us mere gringos. I’ve used this cake recipe before from my favorite recipe book, The Pastry Queen by Rebecca Rather.

Into the cupcake tins the batter went, before I could thieve my way through the mixing bowl with generous taste tests. They bake beautifully flat, like a blank, delicious canvas for an exciting and delicious buttercream. I made a basic buttercream and added vanilla, a generous amount of cinnamon, and freshly toasted pecans. The pecans are brittle enough after toasting to break down into fine, tiny pieces, inundating the frosting with its sweet, nutty flavor. Pipe or smear the frosting on top of the cooled little cupcakes, and top with a pretty toasted pecan piece for presentation’s sake.

I had enough of these leftover to take to our small group, as well as to send off with Kevin to work the next day. Both avenues are beneficial… The first feeds the other couples we love so dearly who walk through life alongside us, and the second is hopefully helping Kevin climb the ranks at work (ha!, but maybe….)

With the undoubted lineup of Christmas parties and festivities already filling your calendar, go ahead and offer to bring “a dessert” and knock people’s winter socks off with these.

Or just make them for yourself and the people you love, then put on sweatpants and binge watch Doctor Who on Netflix with a dog of equal cuteness as the sweet old grump above. Just a personal suggestion. 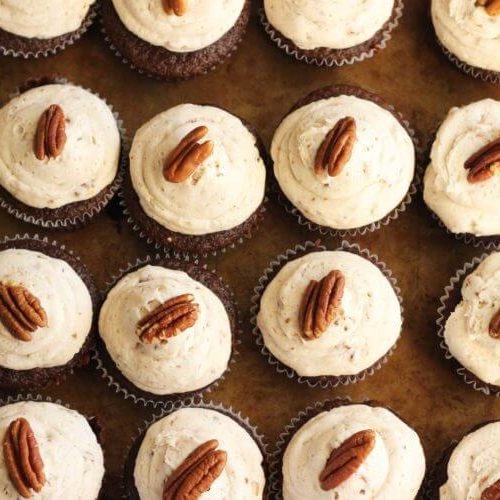 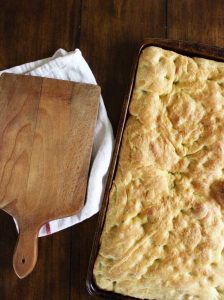 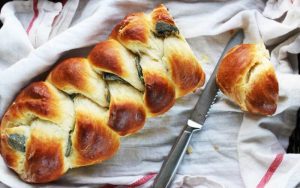 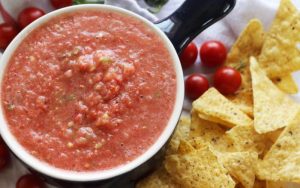 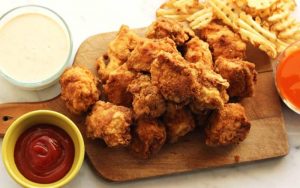